In Geodynamics, measuring tilt means the observation of the angle between the local direction of the gravity (which is called the vertical) and the direction of a local earth-fixed baseline.

Furthermore, due to the responses of the Earth to the tidal forces as well as due to other geo-kinematical processes the direction of the baseline varies with time too. Hence, the observation of the temporally changing tilt angle leads to very complex time series,
containing information about the properties of the matter of the solid Earth, in local, regional and global scale.

Instruments for the continuous measurement of the tilt angle variations are called tiltmeters (or inclinometers). The present state-of-the-art allows for a signal resolution up to 0.000001″ (seconds of arc); for illustration: changing the direction of a pointer of 1km length by 0.000001″ leads to a lateral displacement at the pointer’s head by just 0.000005mm (5 nanometer).

Whilst the local geometrical baseline mentioned before can be materialized by appropriate bench marks the indication of the local direction of the gravity force needs specific physical sensors.

Basically, one can differentiate between two types of such sensors: one alternative is a free-hanging pendulum which represents the local vertical; the other alternative is the free surface of a liquid (communicating vessels as a specific variant), its position representing the local horizontal, being perpendicular to the direction of the local gravity.

The so called horizontal pendulum is a special construction to augment tilt induced lateral displacements at the head of a pendulum mechanically, which usually are very small in the case of a vertical pendulum (easily position resolutions in the order of the distances of atoms in a crystal lattice are needed). The rotation axis of the lever-arm of a pendulum is now elevated from the horizontal to close to the vertical with rotation axis and vertical in the same plane; in this particular case any small lateral tilt will be associated with an essentially enlarged lateral deflection of the pendulum head. One benefits from the mechanical principle that matter trends to a position which is associated with the lowest potential energy (the principle is in practice well known for doors with not vertically positioned hinges).

The watertube tiltmeter WTH2O is installed in the Walferdange Underground Laboratory for Geodynamics (WULG) since 1997, and was functional until 2007.

When the instrument is tilted, the liquid level rises in one head and falls in the other. The liquid (water) is covered in both heads by silicone oil to prevent evaporation.
The position of the water surface in both heads is measured thanks to the capacitance of the water-oil system present between an upper electrode (immerged in the oil) and the bottom of the vessel. 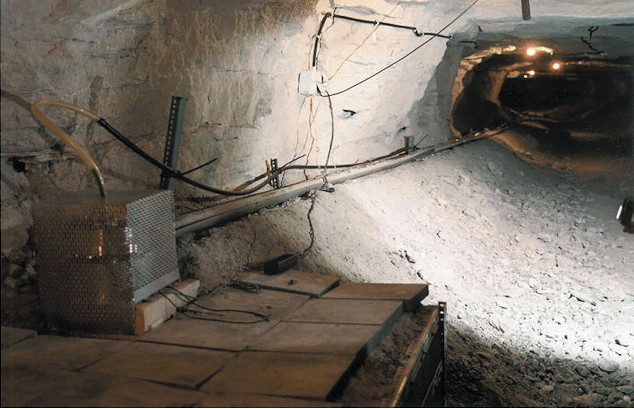 The WTH2O is (one of) the highest resolution tiltmeter ever built and installed in the WULG. 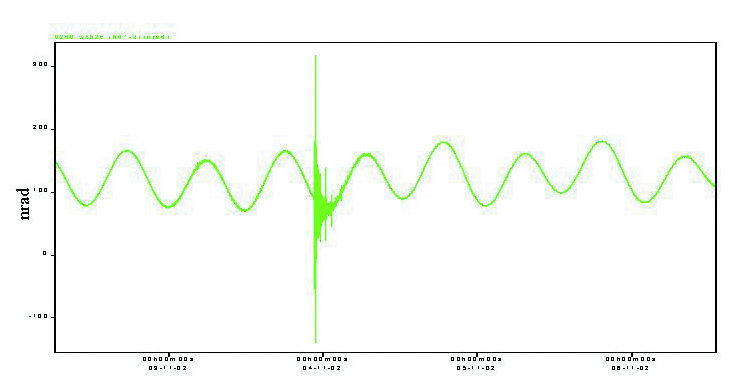 Four days of tilt records made with the wth2o. In addition to the Earth tide, one can observe the Denali Earthquake, Alaska (Novembre 3 2002, magnitude Mw7.9 ).

The Prototype of a vertical pendulum basing on the double-pendulum-principle is ready to be installed in the reconstructed “Old laboratory”.