Seismicity Patterns in the Euro-Med Region

Thanks to all participants for their contributions! 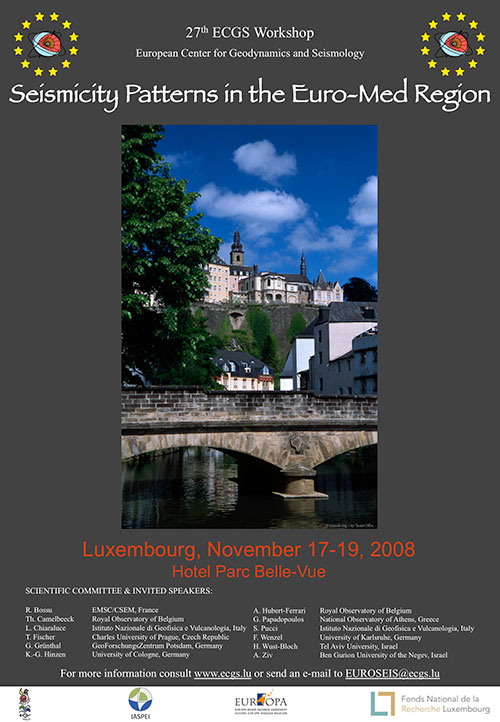 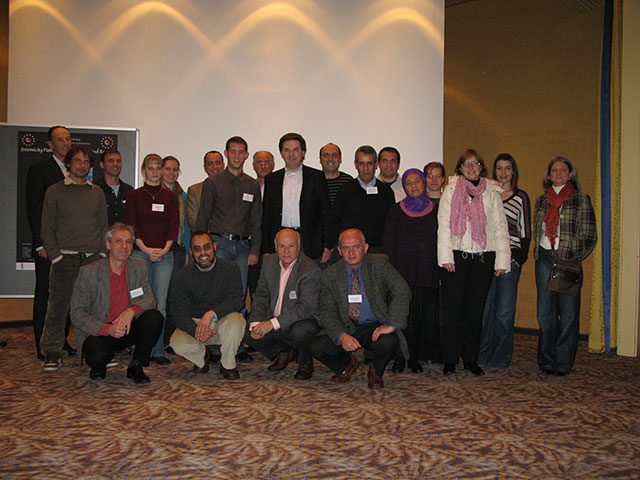 Click the PDF-icon to download the updated second circular with all necessary information as Adobe Acrobat PDF:

With the support of

SCOPE OF THE WORKSHOP

The 27th edition of the multi-disciplinary ECGS workshops is dedicated this year to the seismicity of the European-Mediterranean region.

The workshop is organized by the European Center for Geodynamics and Seismology (ECGS).

Europe and the Mediterranean are confronted with a high variability of seismicity patterns. The Mediterranean includes crustal and intermediate-depth seismicity related to the complex African-Eurasian plate interaction. Other areas of lower seismicity are characterized by diffuse and intermittent activity.
Some of the seismicity is related to major faults (e.g. North Anatolian fault, Dead Sea fault) or subduction zones (Greece, Calabria, Vrancea), some is rather diffuse.

The main objective of the workshop is to develop an overview on the variability of seismicity patterns in the Euro-Med region, both spatially and temporally, and its tectonic framework, but also explore its potential for future earthquake forecasting.

Areas of particular interest include the seismically highly active regions around the entire Mediterranean as well as the regions of lower seismic activity in Central Europe with particular emphasis on the Rhine graben system. Special attention will be given to unravel differences and similarities in the seismicity of the North Anatolian and Dead Sea fault systems as well as between the areas of intermediate-depth seismicity (Vrancea, Calabria, Hellenic arc).

The workshop will discuss the following aspects:

Accommodation: On site (Hotel Parc Belle-Vue or similar nearby)
Number of participants will be limited. REGISTER NOW !
Registration fee: 200 € / 3days per participant. This includes 2 nights, breakfasts and lunches during the workshop. (300 € after July 31, 2008).
Financial support: a limited number of grants will be available. Application should be sent before July 31, 2008 to EUROSEIS@ecgs.lu

The conference will be held at hotel Parc Belle-Vue in the center of Luxembourg, the cosmopolitan capital of the Grand Duchy of Luxembourg and human-sized city. Luxembourg is 2h drive from Brussels or Strasbourg, 3h from Frankfurt, 4h from Paris.

Luxembourg was a fortress city with reputation to be unseizable, strategically located between the French Kingdom and the German Empire. It was one of the major strongholds in Europe from the 16th Century through its dismantlement in 1867.

Today, Luxembourg is well known as an international Financial Center and for hosting key institutions such as the European Parliament and the European Court of Justice. It is a dynamic and modern city, was European Capital of Culture for the second time in 2007, and is part of the World Heritage List of UNESCO. Enjoy its Old Quarters, fortifications, museums, exhibitions and more.

To be distributed on the web after June 29, 2008. Will contain information on accommodation, payment procedure, preliminary program, presentation and poster guide lines, directions, maps to reach us, etc…

Required for program selection. Abstract volume will be distributed at workshop registration.

Color: will be printed in black and white

Will be published in the “Cahiers du Centre Européen de Géodynamique et de Séismologie”. Guidelines will be given in the second circular.